If scientists have followed my blog and read my paper, many of the experiments that we need to carry out should be obvious.  However, the following points may not be obvious:

For a general discussion of the seasonality of respiratory viruses, written for the layperson, please see

Every winter, colds and flu increase

For detailed scientific information about the seasonality of respiratory viruses, including discussion of the trade-off model, viral dormancy and much else, see my 2016 paper:

For a discussion of the strange timing and duration of influenza epidemics, please see

For information about the probable seasonality of Covid-19, and whether we can expect it to become rarer in the summer, or reappear in the fall, please see

Predicting the seasonality of Covid-19

For comments about the epidemiology of Covid and other respiratory illnesses, please see

Covid 19 and the trade-off model

For a simple model of the transmission of viruses such as CoV-2, please see

A simple model of CoV-2 transmission

For comments about how quickly we can expect viruses to adapt to new environments, please see

Suggestions for avoiding colds and flu – and Covid-19

2 thoughts on “Technical notes on CoV2”

Predicting the seasonality of Covid-19

Please CLICK ON AN IMAGE to open it in a new tab.
.

1. – Graph II from van Loghem’s report on the epidemiology of respiratory illnesses in the Netherlands in the winter of 1925/26. I have superimposed ambient temperature at five Dutch weather stations (colored lines) with the temperature scale inverted (lowest temperatures at the top). From Van Loghem JJ. J Hyg 1928; 28(01):33–54.
.

2. – Hope-Simpson’s record of feverish respiratory illnesses in his medical practice in Cirencester, UK, compared with notifications of such diseases in Prague, Czechoslovakia 1969–74. From Hope-Simpson RE. J Hyg 1981; 86(01):35–47.
. 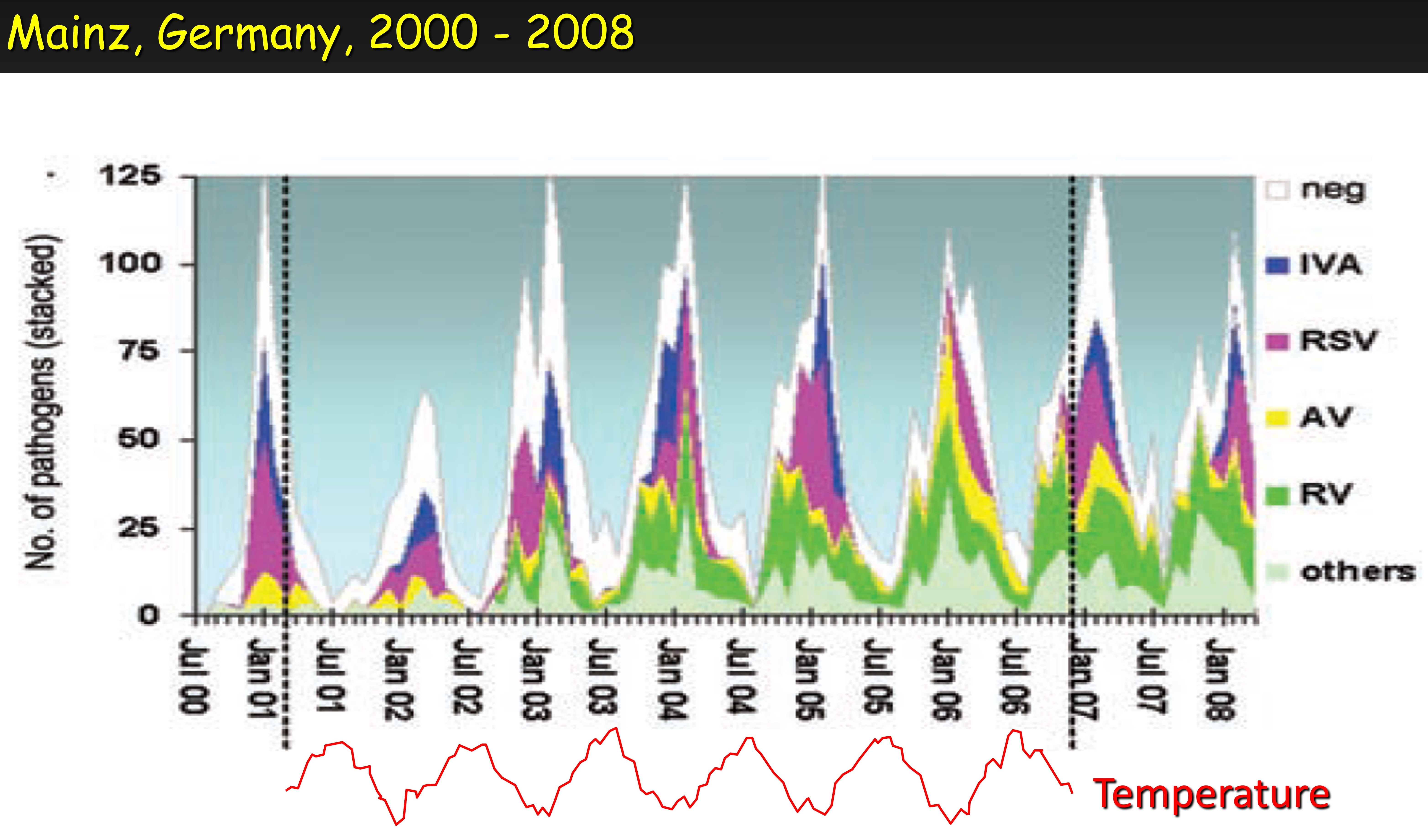 4. – The viruses that caused respiratory tract infections in hospitalized children in Buenos Aires, Argentina, which has humid subtropical climate, 1998 – 2003. The four most frequent pathogens were, in order, respiratory syncytial virus, influenza A, adenovirus, and parainfluenza. From Viegas M et al. J Infection 2004; 49(3):222–8.
.

5. – The viruses that caused respiratory tract infections in hospitalized children in Singapore, which has a tropical climate, 1990-94. The four most frequent pathogens were, in order, respiratory syncytial virus, parainfluenza, influenza A and adenovirus. Chew FT et al. Epidemiol Infect 1998; 121 (01):121–8.
.

6. – The Eurowinter Group analyzed the climate and the measures taken to protect individuals from cold in eight European regions, ranging from northern Finland to Athens. The table shows the regression coefficients (R) and their significance (p), for cause-specific indices of respiratory disease-related mortality on personal cold-exposure factors standardized at 7°C mean daily temperature. I have added labels to the plot on the right, drawing attention to some points that I found interesting. The most dangerous activities are at the top left of the plot, with the most protective at the bottom left. Activities that don’t affect the chance of dying from respiratory illness are on the right or at the middle level. Donaldson G et al. (The Eurowinter Group). Lancet 1997; 349:1341–6.
.

7. – During sporting competitions people tend to crowd together in bars and at home to watch the events. The figure above shows that during the 2014 FIFA World Cup, in 18 countries in the Northern Hemisphere, there was no increase in the number of Google searches for terms related to colds and flu. It seems safe to conclude that the peaks that can be seen in winter in every country are not driven by crowding. (Notice the epidemics of colds in early autumn 2014. Autumn epidemics quite often appear when the temperature dips at the end of summer.)
.

8. – Humidity: a fashionable explanation of influenza seasonality. In the last few years it has been suggested that flu seasonality is the result of the greater stability of flu virions (virus particles) in cold, dry conditions. (This comes under M2 in my categorization.) There are two major problems here: first, we have to account for the much higher levels of influenza during the rainy season in the tropics compared to other times of the year. For example, in Fortaleza (northern Brazil) influenza almost disappears outside the rainy season. Second, we would have to believe that the seasonality of influenza was driven by a different mechanism to that of many other respiratory viruses. A dozen studies, shown above, have been carried out where virus aerosols were created in rotating drums (the rotation stops the virions from settling) and the stability of virions was measured in air of different humidities. The results showed that several respiratory viruses (including influenza virus) are indeed more stable in dry air, but several others, including rhinovirus and adenovirus, are much more stable in moist air!
.